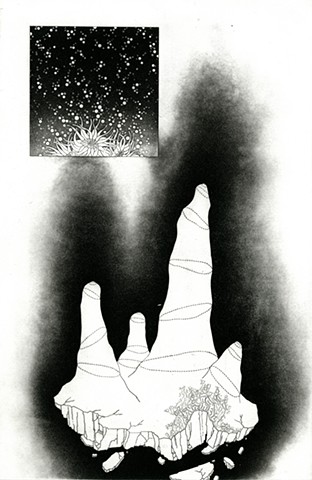 Falling Pillars: the endangered coral, Dendrogyra cylindrus Iliana Baums, PhD Professor, Department of Biology The Pennsylvania State University Coral reefs are dynamic habitats constantly undergoing changes due to waves and storms. Over the millenia, the dominance of corals as reef builders waxed and waned. What is different now is how fast global warming is changing coral reefs. We can watch it happening. The fate of the pillar coral is perhaps the best illustration of that. It was never a dominant or even common species on most reefs in the Caribbean and yet when you see one it is arresting in its beauty. With long tentacles swaying in the current even during daylight hours it rises from the bottom in majestic pillars quite distinct from any other Caribbean species. It is extremely slow growing, adding just a few millimeters to the height of each pillar in a year. One is reminded of California’s Sequoias or perhaps methuselah oaks – all these species make one feel young, not so much as a person but as a species. We don’t know what special role these pillar corals may play in the ecosystem but we do know that they alone harbor a distinct species of algae name after their host (Symbiodinium dendrogyrum). The algae live inside the coral cells and provide the coral with food in return for shelter. Once a year, after the August full moon, the pillar coral along with many other coral species release their eggs and sperm into the water. There, egg and sperm from different colonies must find each other to fertilize and develop into coral larvae, much like what frogs do. Unlike frogs, the coral colonies cannot get up and move to be near each other when they release their eggs and sperm. So, the fewer pillar corals are around the less likely it is that their eggs and sperm find each other to make larvae that can seed a new generation of pillar corals. This is tragic because it is the larvae that can swim through the water and settle near another pillar coral to close that distance and make successful reproduction more likely. When I see a pillar coral in all its majesty it looks like a ghost to me because I know that it likely does not reproduce anymore. Across the Caribbean, our team of colleagues are working on ways to help the Pillar coral reproduce and so preserve the awesome sight of the majestic pillars and their unique symbionts.